Things I did this week:
-Work
-Squat
-Attempt to cook
-Stare at my hair and will it to be brown again
-Shop

A customer referred to me yesterday as ‘the girl with the brown hair’. I could have kissed her. I could have full on snogged her right on the mouth I was so happy. The hair dye is finally fading! I no longer look like I require an excorcism.
Excellent morning.

I had a day off recently and I was in the mood to buy something for the apartment. Gerry gets very worried when I tell him things like that because I tend to come home with some very random and usually unnecessary stuff. My lastest purchases have included a large old fashioned picnic basket (bought in the middle of winter), an exercise stepper machine that is older than time itself and that leaks oil which I swore I would use all the time and which now lives permanently and very inconveniently under our coffee table, a lamp that hummed loudly and then immediately broke, a set of martini glasses which I just HAD to have and have never used, a massive canvas photo of a bicycle which I thought would look nice on the wall but is really quite random, I went through a phase of buying mason jars there for a while and just leaving them on the counter, I got a giant cup that I thought would be cute to use for soup but then Gerry reminded me that neither of us really ever have soup so that has gone unused also….
Anyway I was in the mood again so this time I came home with a tiger print bean bag. As usual Gerry laughed and asked where the hell are we going to put that thing? Was that really necessary etc etc etc…

I am yet to even sit on the thing, he has been on it for hours. I’m not even annoyed as it makes him look like he has a giant afro. 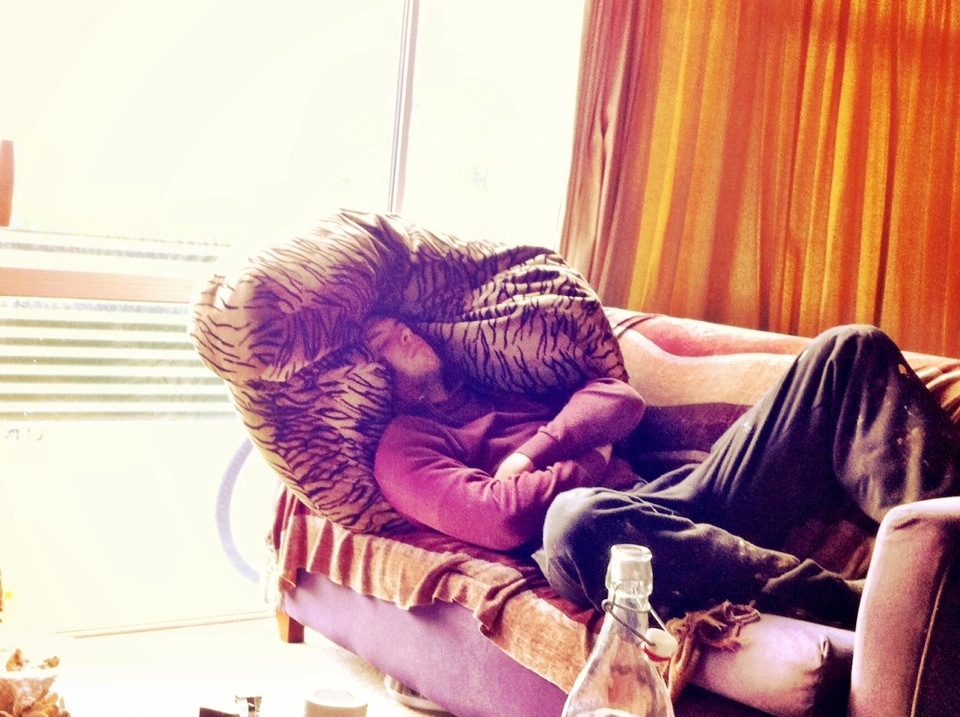 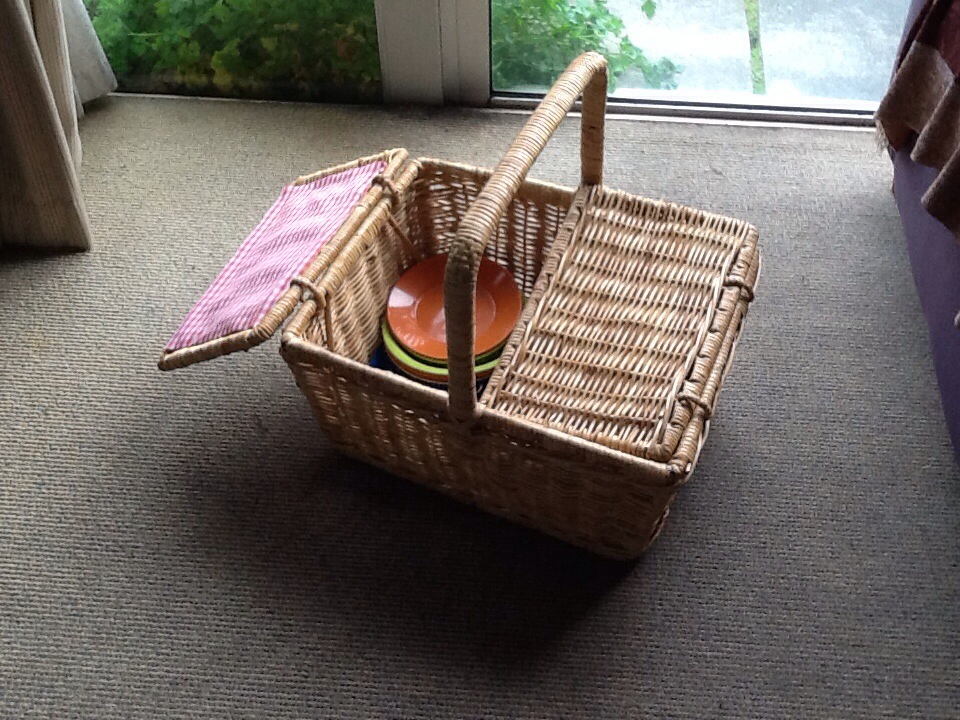 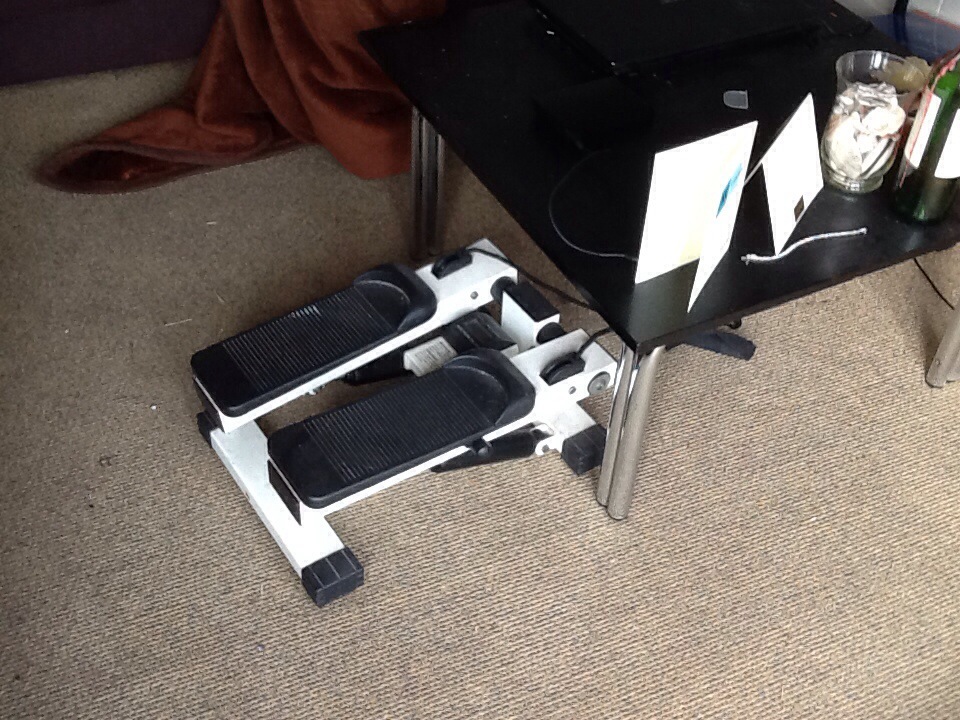 If my thighs could talk they would be screaming abuse at me. I think it may be time to either give up or at least slow down the squat challenge. I was in so much pain yesterday that I thought to myself ‘well I can’t possibly feel any worse so I’ll go to the gym and see if that helps at all.’

To put it mildly…it did NOT help.
It was the first time I had been to the gym in 2 months. I was the only girl there but half way through the workout u could no longer tell if I was a boy or a girl, I slowly but surely morphed into a hyperventilating blatantly unfit red faced I-can’t-tell-if-that’s-a-man-or-a-woman-but-theyr-scary-looking-and-look-like-theyr-going-to-need-a-lift-to-the-hospital-if-they-don’t-get-off-that-treadmill-soon-so-I’m-going-avoid-eye-contact-with-them-just-in-case blob of a person.

The mere act of walking now has me almost weeping. Never before have I noticed how often it’s necessary to bend down and pick stuff up, the dread I feel after accidentally dropping something is on par with the feeling u get when ur alone in the house at night and u hear a noise. ITS COMING FOR ME, the pain, oh the pain…… 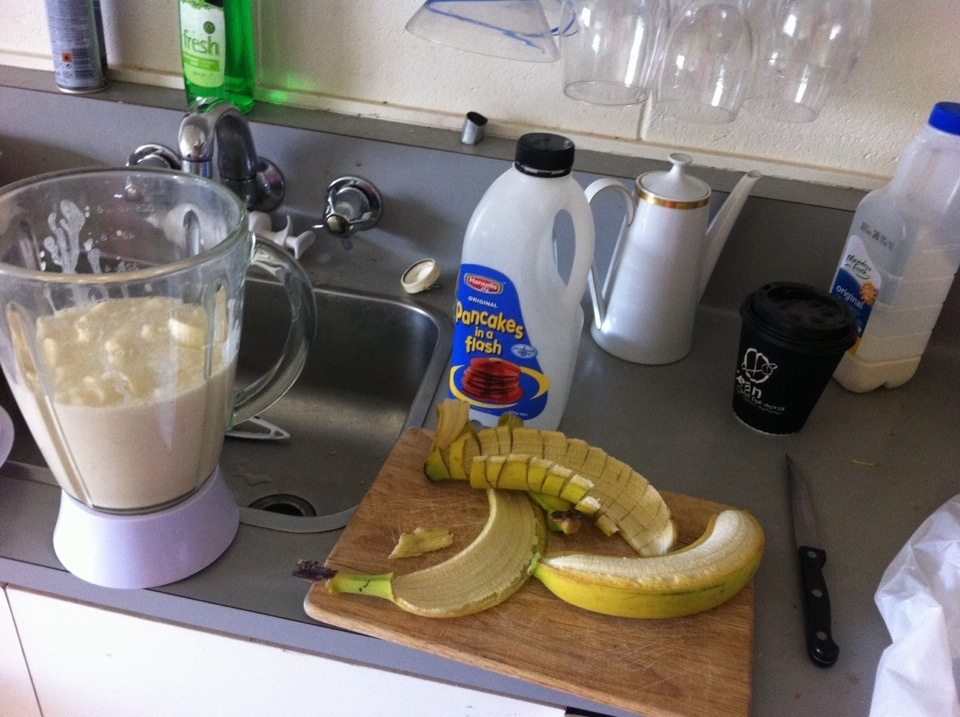 To say that I’m a bad cook is an understatement. To say that I am a terrible-terrible-should-not-be-allowed-into-a-kitchen cook is also a severe understatement.
My problem is that I see a recipe and I think to myself “that looks too easy how can I make it a bit more exciting”. Therefore a lot of the things that I attempt to cook have some unusual taste factors to them, most (all) of which go horribly horribly wrong. I recently had an obsession with coconut flavouring, I started out nice and simple with coconut smoothies and coconut chocolate muffins but it quickly escalated to coconut pasta and coconut cheese sauce and various other things that have no business tasting like coconut.
Gerry had a dentist appointment last week and after having a tooth pulled he could only eat soft foods. Being an excellent girlfriend/dental nurse I had the fantastic idea to make him pancakes. Not normal pancakes tho, no no we were far too good for normal pancakes! So I bought some bananas and (shock)…coconut. Mmmmmmm banana coconut pancakes, what could possibly go wrong….
Well the banana coconut pancake refused to go into a nice round shape so I kept adding to it until it ended up as a giant monster banana coconut pancake that made it it’s mission to cling to the pan for dear life and was not going to flip no matter what, therefore I got the fantastic idea to just leave mr.monster banana coconut pancake in the pan and just put the entire frying pan into the oven and just grill the top. This ended up cooking/burning the bottom and the top but leaving the inside a bananay coconuty goo.
You know it’s true love when ur boyfriend eats a giant banana coconut pile of goo and thanks you for it.
I was violently ill that night but on a positive note I am officially over my coconut obsession. (And cooking obviously) 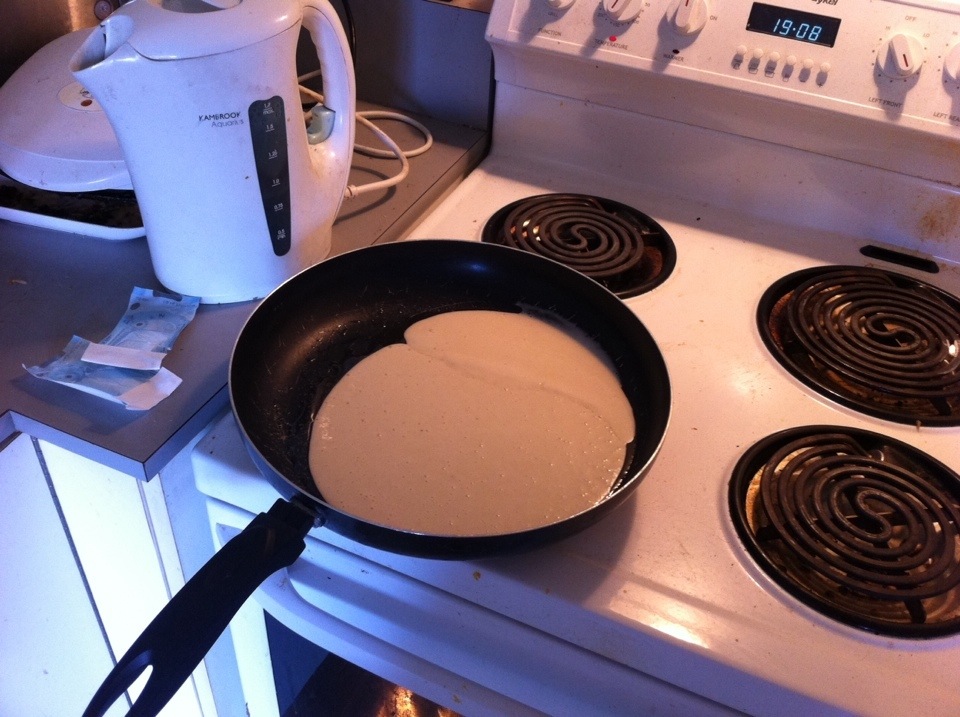 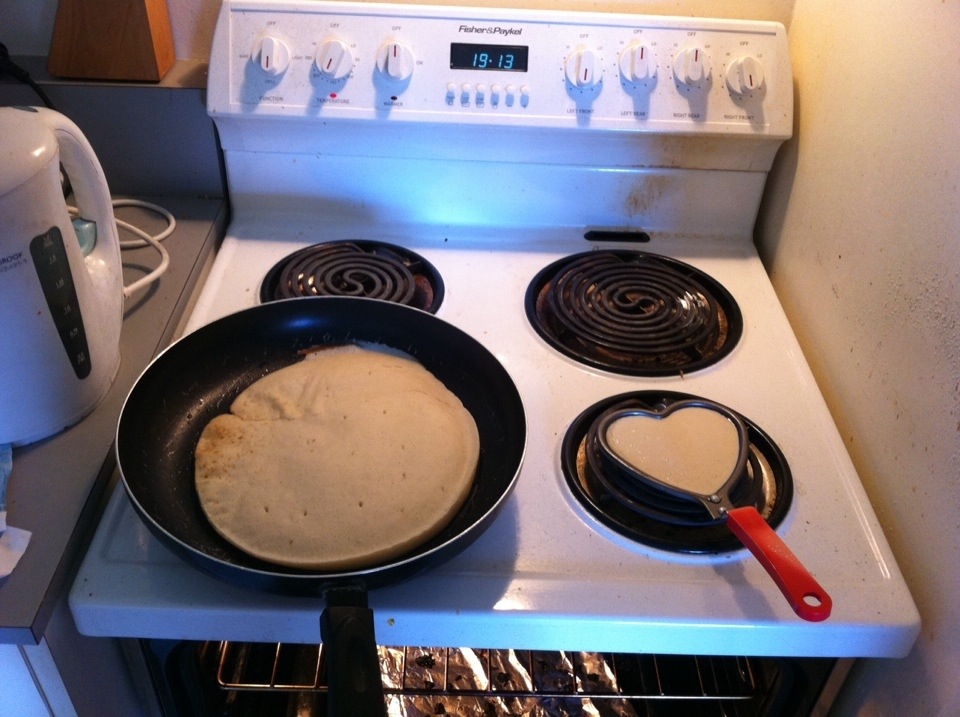 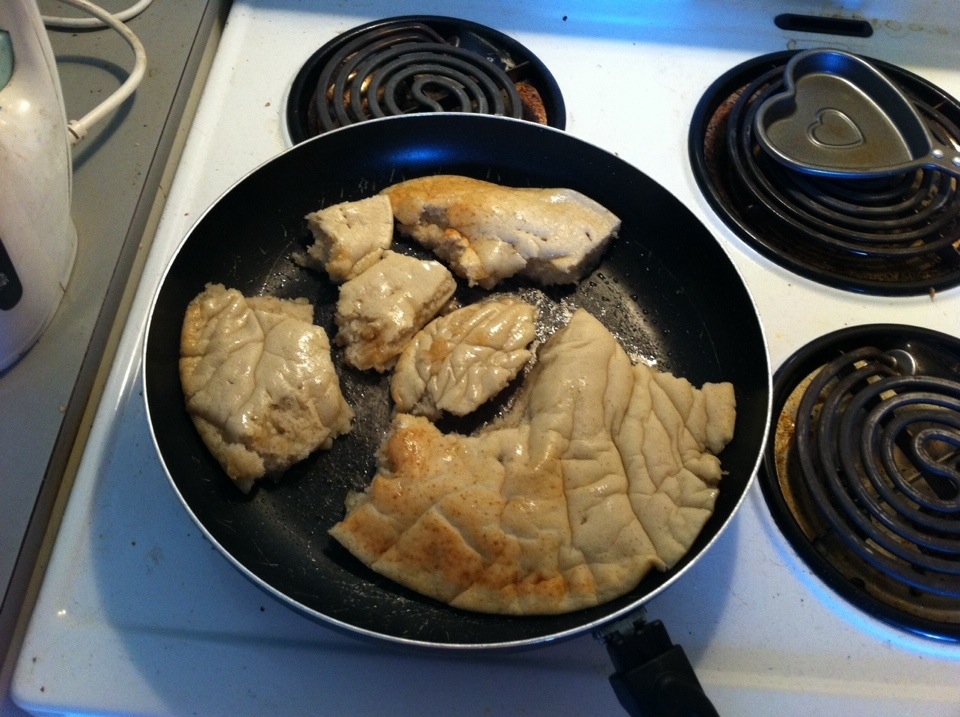 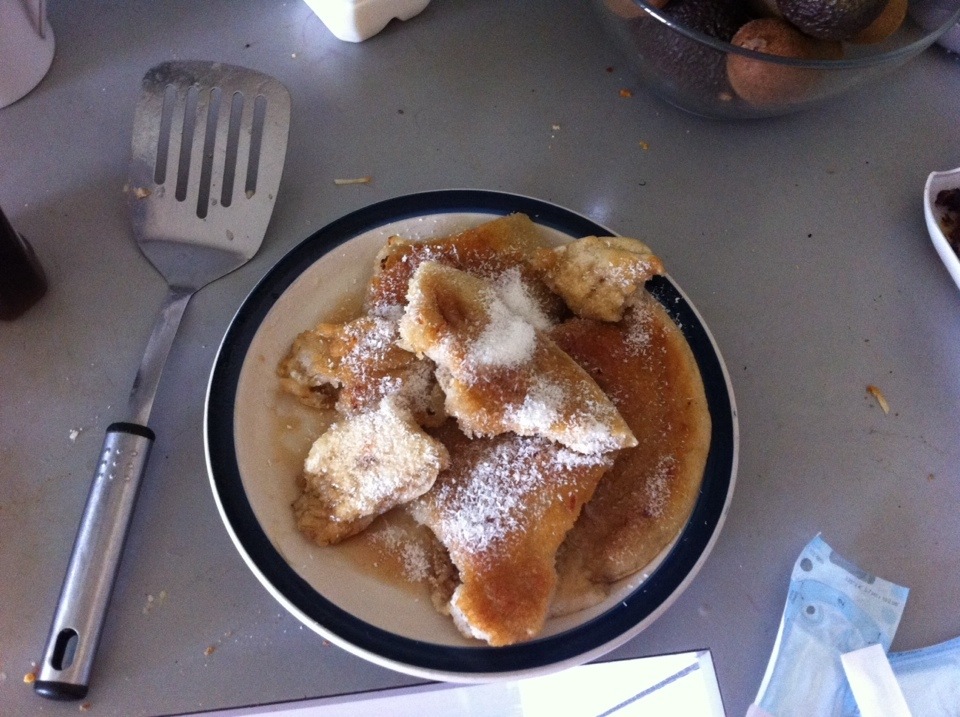